Most kids who grow up in the United States are probably familiar with the musical jingle that makes children go crazy…you know, the one that will motivate any kid to get off of their xbox or play station to go run outside…the ice cream man’s jingle!  You could hear him from a few blocks away and would chase him down to purchase your cold summer treat..mmm.  Growing up in Japan, instead of the ice-cream man we had the Ishi Yaki Imo Man!

For those unfamiliar with Ishi Yaki Imo, they are whole Japanese sweet potatoes that are roasted in stones (ishi = stone, yaki = roast, imo = potato).  The Ishi Yaki Imo Man would drive around in a truck filled with hot stones and roasting potatoes playing his music.  He serves these healthy delicious hot treats in sheets of old newspapers and they usually sell for about 500 yen a pop.

I knew that summer was over and we had officially entered fall when I would hear “Iiiiiiishiiii yaaaaaakiiiii imooooooooo” (here’s a clip I found on youtube).  I remember getting off of the late night school bus to hear the ishi yaki imo man and my mouth would just salivate over the thought of warm roasted Japanese sweet potatoes..yum!!

Recently, my uber talented friend Ashley posted a sweet potato muffin recipe on her blog.  Inspired, I decided to try making a Japanese sweet potato muffin, to celebrate the end of summer and the beginning of fall.  I wanted to re-create the taste of the ishi yaki imo I had enjoyed growing up and I felt that by twerking a recipe I found online, I succeeded in creating a yummilicous ishi yaki imo type muffin!

1.  Lightly grease 12 muffin cups (or you can use cupcake liners) and preheat oven to 350 degrees.

2.  Bring a pot of water to boil.  Meanwhile, peel and cut the Japanese sweet potato into small cubes.  Boil the potatoes for 5 minutes, drain the water, and set them aside. 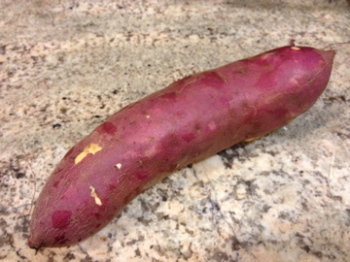 4.  Mix the cake flour and baking powder, then add half the cake flour mixture and half of the milk to the large mixing bowl. Mix until all the ingredients comes together. Then add the remaining flour and milk and mix well once more. 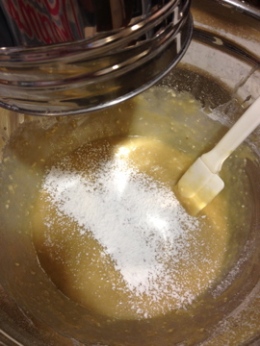 5.  Once the wet and dry ingredients are mixed, mix in half of the Japanese sweet potatoes. 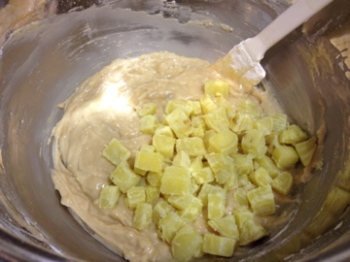 6.  After mixing in half the sweet potatoes, fill the liners or muffin tips about 2/3 of the way with the batter.  Add the remaining sweet potatoes to the tops of each muffin.  I had some batter left over so I added it to my mini donut pan as to not waste any of it :).

7.  Bake at 350 degrees for 20-25 minutes or until a toothpick inserted in the center of the muffin comes out clean.  For the mini donut pan, I only baked them for about 12 minutes.  Set the muffins on a wire rack and let cool.  Once they are cool, you can place them in a container and drizzle them with some honey and cinnamon if you’d like a sweeter more dessert type muffin.  Enjoy!