I love sauce.  And lots of it.  In high school, I was teased all the time because of how many sauces I used at lunch.  Even at work, I always bring hot sauce and am known to use at least three or four different types of sauces with my lunch.  That being said- I think my affinity for sauces comes from me being a non-taster and absolutely LOVING vibrant flavor combinations.  Case-in-point: Bonchon Chicken.  If you’ve never had BonChon Chicken, do yourself a favor and go out and get some.  Not available in your area?  Make them!

BonChon chicken is a famous Korean restaurant known for their signature double-fried chicken coated in their irresistible sauces.  They have both “Soy Garlic” and “BonChon”.  I always go for their “BonChon”.  It is a delectably sweet and spicy sauce that coats their crispy and juicy fried chicken…mmmmm!  The first time I ever ate BonChon was in Boston and ever since moving to the South Bay I’ve been craving Korean fried chicken.  My friend was having a BBQ for his birthday so I thought, why not try making it myself??

I did my research and looked at several different recipes including Japanese ones (hoping they would be more similar to the authentic Korean version) and the BEST recipe I found was one by Marc of No Recipes.  Chef Marc offers plenty of global recipes accompanied by beautiful food photography.  Being a huge fan of Chef Marc’s, I decided to choose his recipe for BonChon chicken and it definitely did not let me (or anyone else at the BBQ) down!  It was crispy, sweet, spicy and addicting.  If you’re in the mood for something flavorful and down right delicious, try making these wings- I promise you won’t regret it.

Recipe adapted from No Recipes

1.  Sprinkle the chicken with salt, cover and refrigerate for 24 hours

2.  In a small saucepan, combine the Okinawan Kokutou (or dark brown sugar), gochujang, sake, garlic, ginger, sesame oil and honey.**  Over medium heat, keep stirring the sauce until it slightly thickens to a syrupy texture (don’t over reduce the sauce).  Add the Japanese 7 spice until it reaches the level of spiciness that you prefer.  Strain the sauce through a fine-mesh sieve.  (According to Chef Marc, this is an important step to keep the chicken from getting soggy.  If the sauce is not strained, the bits of garlic and ginger will stick to the chicken and cause it to lose its crispiness)

**Since I love sauce, I tripled the recipe for just the sauce part.  The ingredients shown above represents 1 serving.  If you want a saucier wing, double or triple the recipe.

4.  Remove excess moisture from the chicken with paper towels and toss the chicken in the potato starch. 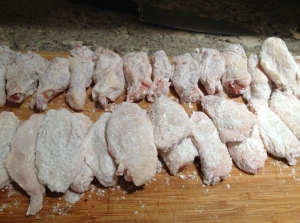 5. Fry the chicken in 2 batches for the first fry-sesh (I did the top layer first and then the second layer).  Fry each batch for 10 minutes at 320 degrees.  After they have been removed from the oil, increase the oil temperature to 375 degrees and place all of the chicken in the pot and deep fry for 2-3 minutes until they are golden brown.

6. Transfer the chicken directly from the fryer to the bowl of sauce and coat with the sauce.  Immediately transfer the coated chicken to a serving platter and serve hot.

These wings went fast.  I’m definitely planning on making them again but will probably tweak the recipe to make them even spicier 😉