I had a ton of egg yolks left over from my Macaron baking so I decided to use them for my first attempt at making eclairs. I initially wanted to make choux creams since I absolutely LOVE choux cream (cream puffs?), especially the ones sold at Beard Papa in Japan. I think they have a few locations in the US as well but if you’ve never been to one I recommend it. The whole store smells like BUTTAH. They fill the choux pastry to order so the shell is still a little bit crispy and not at all soggy. I remember eating them on my bus rides home from Shibuya to Roppongi since they had a Beard Papa store right next to the bus stop. The wafting smell of butter was just too difficult to resist!

The choux cream recipe in Bouchon Bakery calls for silicone molds as well as making extra cookie dough to put on top of it so I thought I would save that for another day since 1) I don’t have silicon molds and 2) I don’t wanna be baking extra cookies. The eclairs in the cookbook are absolutely gorgeous and as I began making them I prayyyyed that my eclairs would look at least a tiny bit similar.

The first step in preparing the eclairs was making the pastry cream. I’ve never made  pastry cream from scratch before so I was a bit nervous. The cream takes quite a bit of work to make (at least it did for me), especially at the end since the cream needs to be pushed through a fine-mesh sieve which took FOR-E-VER. Once I finished making it, I saran wrap on top of the cream and made sure it made contact with the surface of the cream so it wouldn’t form a “skin”. 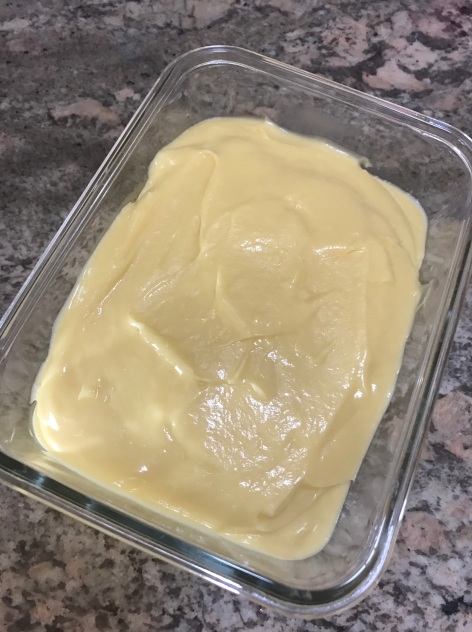 I think the last time I made pate a choux aka choux pastry was when I was in culinary school. I also made churro dough once but I remember it not ending so well (super dense churros that just weren’t good). The process itself is quite simple, but it’s SO important to follow the directions EXACTLY. I had some trouble with figuring out when the dough was dry enough to add it to my kitchenaid mixer.

I didn’t want the dough to dry out so I erred on the side of caution and took it off the heat while the dough still looked a little moist. Once the dough’s been added to the mixer, you’re supposed to sloooowly beat in the eggs. I had whisked my eggs to get the exact weight that I needed for the recipe, so slowly adding in the eggs proved quite difficult. I tried using a tablespoon measuring spoon but I couldn’t get enough of the egg in each tablespoon and I realized that would take forever. I started pouring it out of the bowl the eggs were in and immediately most of the eggs spilled into the dough. Major fail. My heart dropped a little but I moved onto the next step – piping.

Piping the dough was not as difficult as I had thought it would be. I didn’t have the correct pastry tip to make the same shape as the eclairs featured in the cookbook, so I just used the coupler instead which has an opening of about 1/2″.

As I began baking the choux pastry and staring intently into the oven, I saw that the dough wasn’t puffing up 😦 I realized that I didn’t dry out the dough enough in the first vital steps and thus, I ended up with an eggy pancakey type texture. Devastating! I had already made all the pastry cream and everything…waaaah! But you know what? We all learn from our mistakes. I ended up having to bake the choux pastry for double the time because of the density of the dough. 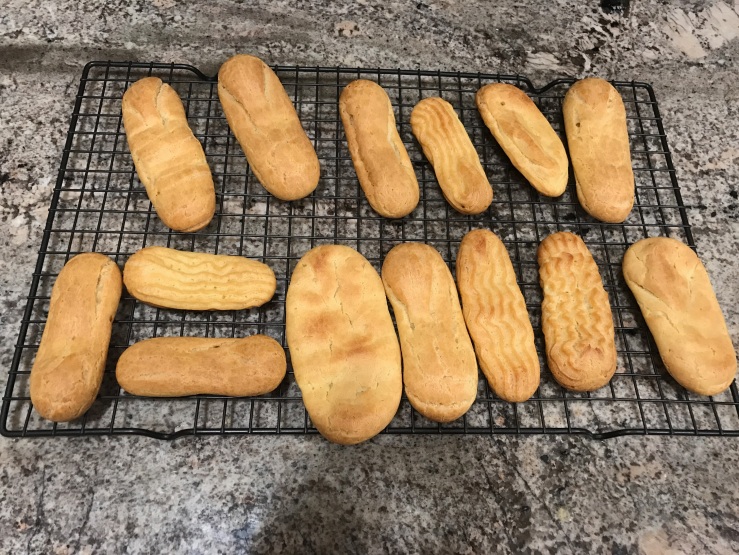 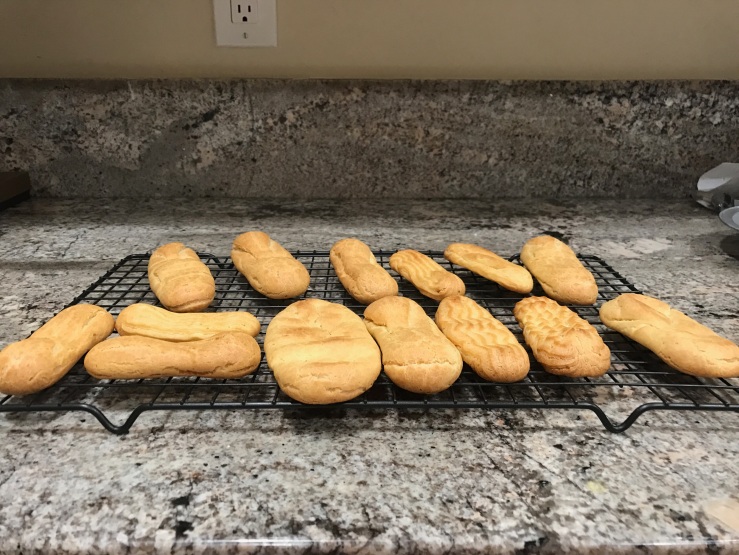 Once all the eclair shells were baked and cooled, I made a chocolate glaze. I didn’t use the recipe that was in the cookbook as it called for a “neutral glaze”, which I didn’t have on hand. I made the glaze with butter, Guittard dark chocolate chips, and added some heavy cream to thin it out. I filled the shells with the pastry cream and glazed them according to the instructions in the cookbook and a couple of the eclairs actually LOOKED like eclairs! Hooray! They also tasted pretty good, but the choux pastry was NOT a choux pastry. I effed that part up so I think I’m going to keep practicing just making the shells until I’m more familiar with the dough. 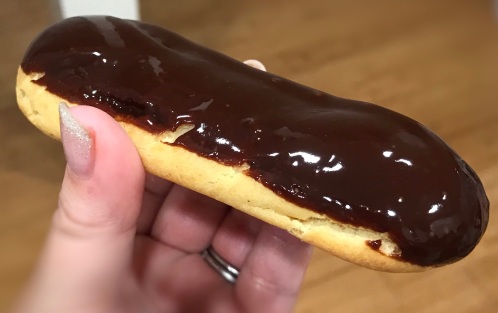 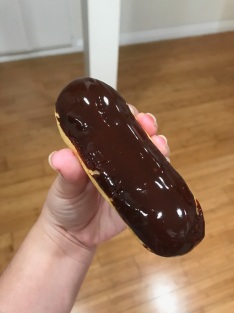 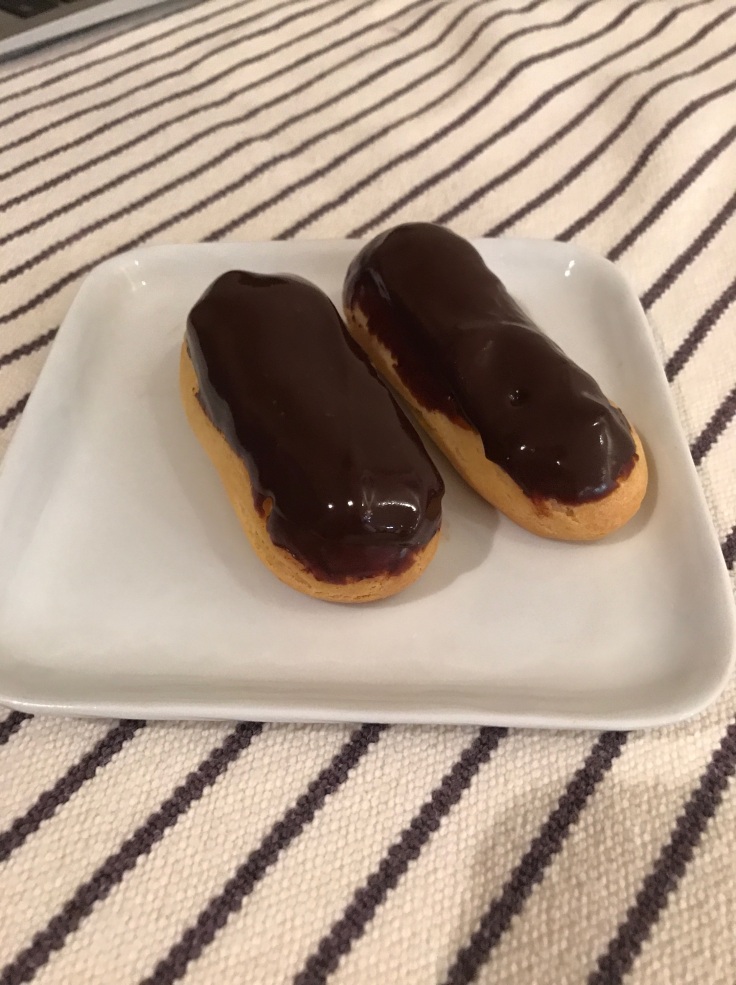 What I learned making these finicky desserts is that I have a difficult time comprehending the verbiage used in the Bouchon Bakery cookbook. I’m also a visual learner so it helps a lot more if I can actually see the steps (i.e., how dry the dough should look before moving on to the next step). The last 2 times I’ve failed in making my desserts, I’ve researched online AFTER my failure. Going forward, I’ll make sure to research and watch some YouTube videos prior to baking more difficult pastries.